For an artist, part of the creative process is bringing forth something from nothing. Ideas develop, a drawn line closes to become a shape, and through the manipulation of space that shape becomes a form.

Maureen’s ongoing practice involves a conceptual and technical investigation into the development of line and form.
Her inspiration is drawn from a fascination with the fundamental geometric patterns that are found within nature’s building blocks,
Maureen likes to think of her brooches as small wearable sculptures. “When I am designing them, I create forms that not only sit well on the body but also sit comfortably on a shelf or window sill and can be enjoyed all the time”. She is currently working on some larger scale works that will definitely not be able to be worn…… 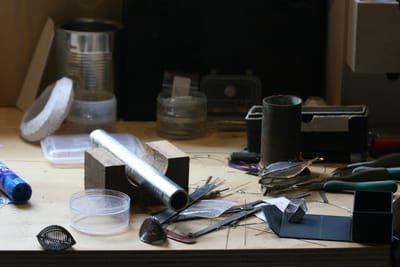 Maureen Faye–Chauhan is an Australian Artist and Jewellery maker,
who lives and works amongst the gum trees in a semi-rural community just outside of the city of Melbourne, Australia.

Her works are held in the collection of the The Musée des Arts Décoratifs, in Paris,
the National gallery of Australia,
the Art Gallery of South Australia
and the Bluestone Collection, Melbourne.

Maureen completed a Masters degree in Fine Arts at Monash University in Melbourne, Australia in 2008.

Contact me via Email or see my work in Australia at